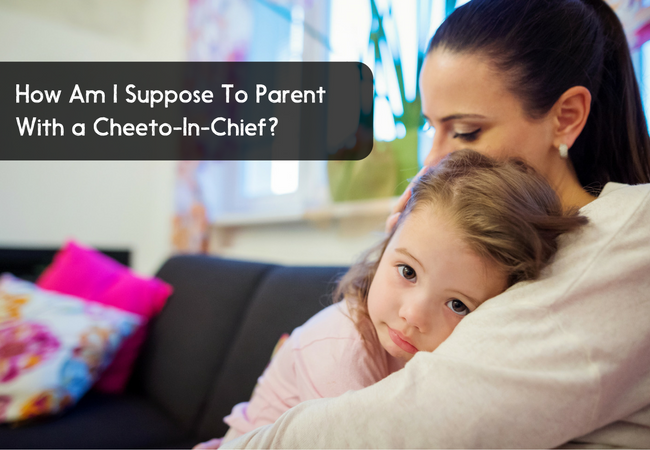 On election night, when it became clear what was going to happen, I finished my now-ironic celebratory glass of wine, kissed my aghast and appalled husband, and crawled into bed to wrap my arms around my baby.

I’m not even American; I live in Ontario, a short military march north of the border like the majority of the Canadian population. But I am feeling sad and betrayed and terrified that our bigger, tougher neighbours just elected a misogynist walking-personality-disorder endorsed by the KKK for king of the nuclear codes.

My kid was born white, with plumbing traditionally interpreted as male, and I have taken it as the closest thing I have to a sacred duty to bring him up to be a part of the world’s solutions, not its longstanding problems. This will take more vigilance, action and role modelling than I can currently appreciate, and I know that it’s a tall order, but it’s the reason I’m raising a kid and I take it very seriously.
Now the person holding the highest office in the world got there despite never doing his homework, talking to anyone with respect, honouring the truth, acknowledging the facts, or proposing reasonable solutions. He got there despite admitting to sexual assault, and despite allegations of raping a child; despite predicating his campaign on blatant racist rhetoric; despite discussing climate change as a hoax by the Chinese and promising to overrule the basic tenets of the American Constitution and expressing solidarity with white police killing unarmed Black folks without cause. And my kid will grow up seeing at least his plumbing and skin colour in common with this bewildering hate geyser, spewing from the Oval Office in the most powerful country in the world during his formative years. I thought about this as I pressed my face to my baby’s hair and sobbed, scared and sad and shamefaced that the safety I had promised to chase for my child can suddenly be so threatened.

And then I pulled myself together, and I remembered that this wasn’t an alien invasion or a natural disaster–this was people, entangled in social messes. If white folks like me can break something this bad, we better figure out how to sweep it up before it cuts someone. Grieve some, then pull on your boots and get to work.

So what can we do? (Especially when it’s not even our government?)
I have some suggestions.

Take care of yourself. With a misogynist in the White House, loving women is now a revolutionary act. Honour your feelings and support each other. Be present with each other. Honour your womanhood, whatever that means to you, with the honesty and force that it deserves. Whether we want it to or not, it’ll be a potent example for our kids.

Raise your sons right. Show them in your actions that acting “feminine” is as strong and legitimate and necessary and natural as acting “masculine” is. Teach them to name their feelings, to embrace them until they pass, to explain them to others, and to recognize the connection between those feelings and the actions people choose in the world–themselves included. Help them cry, and ask them to comfort others with empathy. Resist with every fibre of your being the urge to wrangle them into what we think is “male” behaviour, and defend them from a world that will try to punish them from escaping that tiny, insufficient pen. Gloria Steinem said, “we’ve begun to raise daughters more like sons … but few have the courage to raise our sons more like our daughters.” Get the courage. Free your boys.

Expose your kids and yourself to as much diversity as you can muster. Eat food from other places, fast a day or two during Ramadan, read books with Black girl protagonists, watch television starring trans folks with accents and have play dates with kids with different families and languages and meet people, people, -people-. Support and embrace these communities that are different from the ones you are familiar with. Don’t take tours or vacations into the worlds of these folks–mainstream them into your lives. Get invested in their success. You can’t turn us against people who we know, love and trust. We would not be standing here staring down a rollback of progress if we knew the bogeyman of the “Other” wasn’t real.

Teach your children that the things they do matter. Demand that they do their homework, respect the truth, consider the effects of their words and actions, think of the point of view of others, sympathize with their enemies. Show them how. And show them how to fail, regroup, take criticism with grace, and change direction so they can succeed.

Teach your children that the people around them matter. Protect each other. Stand up against bigotry in public, in front of your kids. Talk about this uncomfortable stuff with them. Read the news and engage critically with it. Brainstorm solutions with your kid. Contact your democratic representative, and if they don’t listen, contact another one, and write a petition, and talk to your friends, and march on your legislature if you have to. Acknowledge our history, the warm-fuzzy parts and the cringey-shameful parts. Teach them that there is no opting out–that doing nothing is a show of support for the status quo. Sometimes that’s okay. Other times it’s the sort of thing that might leave you in the wrong parts of a future history lesson. This sounds scary, but it’s only true. The things you do matter, so do them right.

Decide, openly and honestly, that we are stronger together than we are apart, that our differences make us better when we build bridges instead of erecting walls. Then get to building bridges.

And I dunno, maybe also buy some solar panels and build a bomb shelter or something. It’s going to be an intense next few years.

(I’m definitely missing something. How are you coping, and how are you planning on Trump-proofing your kids? Feel free to leave suggestions in the comments.)